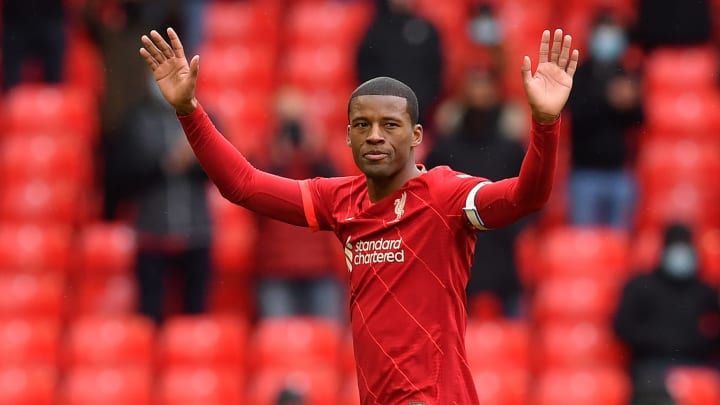 Liverpool star Georginio Wijnaldum could complete his long-awaited move to Barcelona in the summer after his entourage was spotted before the Camp Nou headquarters.

Wijnaldum emerged as one of Ronald Koeman’s top transfer targets last summer, but Barcelona failed to match Liverpool’s demands, which saw the deal fail to materialize.

The 30-year-old eventually remained at Anfield and has gone on to participate in each of Liverpool’s 38 Premier League fixtures this season, registering 34 starts in the process.

Despite playing a prominent role in Jurgen Klopp’s tactical set-up, the former Newcastle United man has refused to commit his long-term future to the Reds.

Wijnaldum’s current deal in Merseyside runs out this summer, which means he will be free to choose his next destination, with Liverpool powerless to stop his departure.

The Netherlands international is seeking a three-year contract and is reportedly willing to take a significant pay cut to facilitate his move to Barcelona.

As reported by Sport, the player’s representative was spotted heading to the Catalans headquarters on Tuesday.

Even though Koeman’s future at Camp Nou hangs in the balance on the back of a disappointing season, the Dutchman’s potential summer exit is not a deal-breaker for Gini.

Koeman has come under heavy scrutiny after missing out on both the Champions League and La Liga titles. However, newly-elected president Joan Laporta has yet to make up his mind on the ex-Southampton boss.

As for Wijnaldum, he has a host of admirers across Europe. In addition to Barcelona, Inter Milan and Bayern Munich have also registered their interest in the Feyenoord youth academy graduate.

With the summer transfer window approaching rapidly, we may not have to wait long to find out where Gini’s future lies.